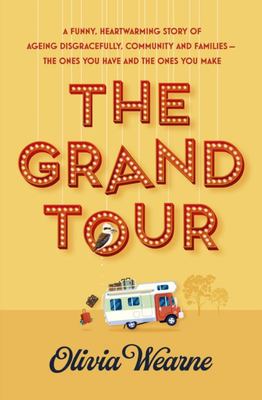 This vivid story of campervans, stowaways and mischief at any age is essentially about families: the ones you have and the ones you make.

When Ruby and Angela embark on a Grey Nomads road trip, the last thing they expect is a tiny stowaway; one who will turn them from unsuspecting tourists into wanted kidnappers and land them in a world of trouble. As their leisurely retirement plans unravel, Angela's relationship with her brother Bernard goes from bad to worse.

Bernard has his own problems to contend with. Adrift in life, his career as a news presenter has been reduced to opening fetes and reading Voss as an audio book (a seemingly impossible task). His troubles are compounded when his wife starts dating a younger man and a drink-driving incident turns him into a celebrity offender.

As Angela and Ruby set about repairing burnt bridges and helping their unexpected guest, and Bernard attempts to patch together his broken life, they discover that even after a lifetime of experience, you're never too old to know better.

A warm, funny, sharply observed story about aging disgracefully and loving the one you're with.